Travel Tale - Ladakh [Part 1] : No twist in the tail,right at the start..Train journey to Delhi!

On top of the world! I understood the real meaning of this phrase in our dream trip – Leh! Yes, you are about to read the travel tales of this fantastic journey across India. I’m presuming that you have gone through the prequel of this write-up as it would give better insights into our plan & all the chaos it had generated. Let me start this wonderful experience with a quote “Adventure may hurt you, but monotony will kill you”. I’m a strong believer in this quote as I hate monotony & would do anything to break through. So, go ahead & imagine how excited I would have been for this trip!

Time had raced past to 19th July 2013 sooner than we anticipated & there we were, waking up on Friday with mixed emotions as the day to start the journey was here. Items on the checklist were ticked, bags packed & the anxiety levels on the rise since the most important aspect of the expedition – our bikes were yet to be packed & ready to board the train with us. Bangalore had experienced average rains in the past few days & we were hoping for a similar day. But, hey how can such an adventurous journey start smoothly ;-) It poured like crazy the whole day making the bike ride to Yeshwanthpur troublesome. However, lots of care & attention by our bwooys ensured the bikes were packed & all set to be loaded onto the train, which would only happen by around 7 PM, after the arrival of the Sampark Kranthi train. The rains continued to cause more trouble as reaching the railway station took us more than 2 hours due to traffic jams.

More surprise was waiting for us when we got there & hopped on the train to load the luggage, which in itself was more than we should have packed! About a foot of water in our coach, to add to our horror we couldn't get any paper/cloth around to clean up the mess & ensure our 19 day trip essentials remained safe until we reached our destination.

The Indian Railways, the largest employer in the world, is certainly an economical way to travel in India as a sleeper ticket from Bangalore to New Delhi cost us about 650 bucks & the promised arrival duration was 36 hrs. To prove the point that everything comes with a price, we had to literally mop the train floor to ensure no water seeped into our bags using the only absorbent material available – the same material used to pack our bikes, the paper egg trays. All that effort & 15 mins prior to the train departure the cleaning staff arrive with a mop :(

After saying good-byes to our parents & 2 of our tour mates who would join us a week later, the train started out of Yeshwanthpur railway station & we settled in, to hog as most of us were damn hungry after all the mopping ;) Delicious homemade chapathis with dal & chutney, Puliogare,Curdrice were gulped down in no time & we all occupied our seats thinking of our journey ahead! This was my night train journey after a long time & as usual stayed awake the whole night since I’m travel conscious. 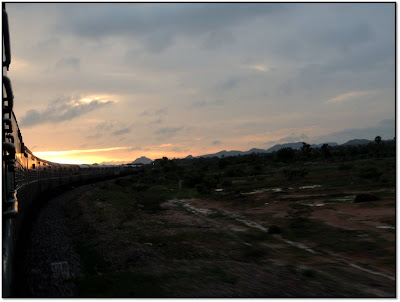 A beautiful sunrise across Kurnool awakened the photography enthusiast in me & I pulled out the camera we had borrowed from a dear friend Pondy :) 2 hours passed in fiddling with the camera & by 8:30 AM we were in Kachiguda station!

Looking at the precise timing, we were hopeful that we would reach Delhi in time. Alas, we didn't have the slightest clue of the damage rain had caused in the states up north!

By 2:00 PM in one of the stations, we heard the announcement that the train will take a deviation at Wardha & travel via Bhopal due to floods in Nagpur. Expected delay was about 8 hours! Clearly, this was not in our plan as we were supposed to ride to Chandigarh on reaching Delhi, but with the current situation we had to take a call on whether we would still be able to do that.

After a lot of deliberation, we decided that we shall halt for the night on reaching Delhi. This meant a loss of 8 hours travel time, hence putting our plan of reaching Manali on the planned date at risk.My bro & sister-in-law had to cancel their train ticket from Delhi to Manali & the bus from Manali to Leh due to the delay!

To our despair, we reached Bhopal only by 8 in the morning on Sunday & we still had more than 750 kms to travel. Surely, this was just the start of our challenges & we were prepared to face it head on. Dumb charades, anthakshari did provide some refreshment in the long journey, however the fervor to get started & cruise on our bikes was itching (probably also because we were closing in on 2 days without bath) :-P
A grueling 45 hours train journey came to a halt as the train crawled into Hazrat Nizamuddin station in New Delhi at 7:00 PM on 21st July 2013. Delayed by 10 hours, hungry, tired, we were desperate to get to a hotel & freshen up as the Delhi humidity even at night was exhausting. This being our state, it was another experience getting the bikes unloaded & delivered from the luggage department. Although I was fortunate enough to not witness the filth in the parcel/luggage section, I could clearly shout out loud that Bangalore railway station is the cleanest station I have seen so far.


It was my first time in the capital & I was shocked at the condition of people around the railway station & also at the gruesome streets of some parts of the city. After some “Seva Paani” (bribe) sessions with the luggage officials, our guys were successful in getting the bikes out of the station.

About an hour of internet search & inquiry led us to Hotel Kabli in a decent locality. By 9:30 PM, we were at the dinner table enjoying good food after 2 days & keen about the next day’s start towards Manali.

More to follow on the rest of the journey, keep reading!!