What would you gift a close friend for his wedding?!

A wrist watch? A holiday card for honeymoon? A home center gift card to set up a new home? The list is endless, but guess what we got as a gift from hubby’s(Sunny)closest friend Mr.Pavan Prabhakar. Hold on to that thought, as you are in for another shock. It was 2 weeks before our second year marriage anniversary, when Pondy as Pavan is fondly called, spoke to Sunnny & reserved a day during the weekend. But the catch here was that the plan for the day was kept undisclosed!!

I would like to believe that Pondy took that long to come up with a gift cause he wanted it to be special, but he just sluggishly puts it as lack of ideas ;-) Whatever may be the case,we were eager to see what he had planned. A day before the “BIG DAY” we got to know that we would be flying in a microlight plane & if the weather permits we would be allowed to fly it ourselves! For an adventure of such magnitude, the least I can say here is that – I couldn't sleep for most parts of the night as the excitement was massive.

We were to pick up Pondy from his house by 6:30 AM on 19th Oct 2013, so that we could make it to the Jakkur Airfield for our appointment at 7. As per the plan, we reached the location on time and were thrilled at the first look of the microlight we would be flying in. A team called the Bangalore Aerosports organizes these adventures along with microlight pilot training as other offerings.

Trust me when I say this – a gentleman in his mid 50’s dressed in a casual random pattern shirt walks out and introduces himself as the pilot who will be flying with us.

So, for a couple of minutes I was apprehensive about the idea of flying as I was reminded of Pondy’s inquiry session with the Aerosports team. Apparently a bunch of FAQ’s were dealt with a lot of technical briefing and the only understandable statement was the fact that, even if the engine turns off during the flight, the microlight is safe as it works as a glider and can be landed without much trouble! However, Mr.Mehta, our pilot put us at ease almost instantly as he explained the manufacture of the microlight & how easy it is to fly.

The amusing fact is that a 2-stroke engine powers this Indian made microlight & is fueled by petrol!!

He was very proud to proclaim that these are the only microlight flights manufactured in our country & are exported for their superior build quality. 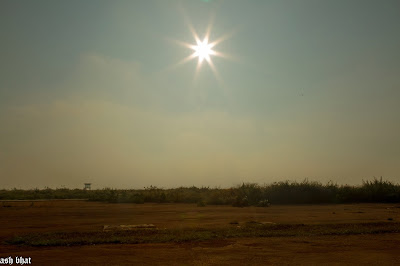 The weather was perfect & thus our hopes of flying the plane were intact.Only one person is allowed to fly along with the pilot as the microlights are built for two people.

A quick talk and we three decided to take on the adventure. Sunny volunteered to go first,followed by Pondy and finally me. 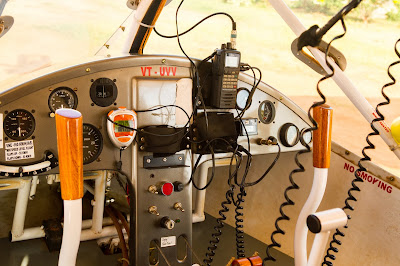 Although the popular saying states that “Experiences cannot be explained” I shall do my best to elucidate those adventurous moments & thus inspire more people to try it.

Similar to a car in a driving school, the microlight has same controls for both the pilots.

A joystick right in between your legs gives the illusion of doing a naive act ;-)

The initial information roll-out happened once we were in the cockpit, I’m unsure it is called that but it certainly sounds alluring! So once I was all strapped up & our pilot gave some introduction about the controls through the aviation headsets, a sudden spike of anxiousness grew.

It was not long before I heard Mr.Mehta telecast a wireless message to the runway authority for a go ahead by saying “Victor Victor, ready for takeoff – awaiting clearance”, the flight was inching towards the airstrip at about 30 kms/hr. Once we got the clearance, he just looked at me & said : “Now, sit back & relax – your safety is my responsibility”. For a fraction of a second I closed my eyes & remembered my parents & my hubby :-P Like a dream, we cruised past 60-80 kms/hr along the runway & we took off.
Within 2 minutes, we were soaring at about 800 feet & the flight slowly leveled up to gain stability. The 180 degree view through the windshield was the best thing ever. It was a treat to watch the birds fly by our side & watch the tiny lakes around Jakkur from an elevation of 1200 feet. Terms like nose-up, nose-down did sound funny since the joystick movement controlled those actions! 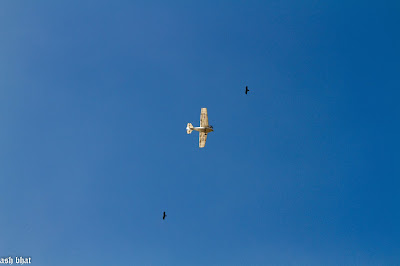 After 5-7 mins, Mr Mehta reclined in his seat & asked me to fly the machine guiding all along. Not in the wildest of my dreams, had I ever thought that I would be flying a plane.

Touching an elevation of 2000 feet, gave a sense of achivement & literally felt like I was on top of the world :-)

It felt like time was racing past swiftly as it seemed like the shortest 40 mins of my life. Thanks to Pavan for this bombastic thought – we shall cherish this as long us our memory permits:-D


Now, to the obvious question – How much did it cost?? Well, we didn't want to arbitrate the value of this gift from Pondy and thus kept mum about it until a couple of days later when we got flooded with queries from our dear friends on details & the cost.

Hence, I decided to put this up on the blog & provide easy access to information. For the 40 mins microlight experience, we (rather Pondy) paid a sum of 7500 INR per person & reservations are to be done at least a week prior. Incidentally, there are a number of aviation operators who offer this facility but the point to note is the approval from DGCA.

Keen about exploring this facet of adventure? Check the following link for more details :)
http://bangaloreaerosports.com/offer.html