Day 2: After a good night sleep, got up by 6:30 AM & decided to go to Gokarna post breakfast. But, our plan was delayed due to the hot water problem & we could only leave the Guest House(GH) by 11:00 AM.


Both hubby & I were not keen on visiting the Murudeshwara temple as we had already seen it during our individual college trips! However, wanted to take a few pics of the mighty shiva idol which is only second to the biggest shiva statue in Nepal. The idol is really nice, set amidst the serene Arabian sea & a treat for photographers. 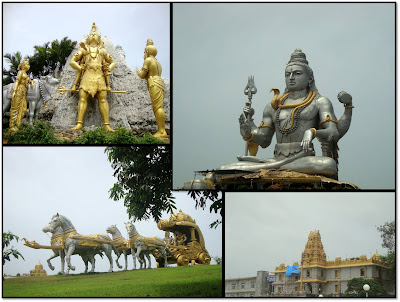 After a few shots, we left Murudeshwara by 11:30 AM and headed towards Gokarna. Gokarna, is yet another temple town in the coast of Karnataka at a distance of 75 kms from Murudeshwara.


While on transit, hubby noticed sign boards of a place called the Mirjan fort just after Honnavara & on inquiry we got to know that it's a good place to visit, located just after Kumta.

After crossing Kumta,we travelled 12 kms to reach the small village of Mirjan. With some guidance from the localities  took the left deviation from the highway & rode about 3 kms to reach Mirjan fort. Apart from a couple of tourists, the place was empty & silent. 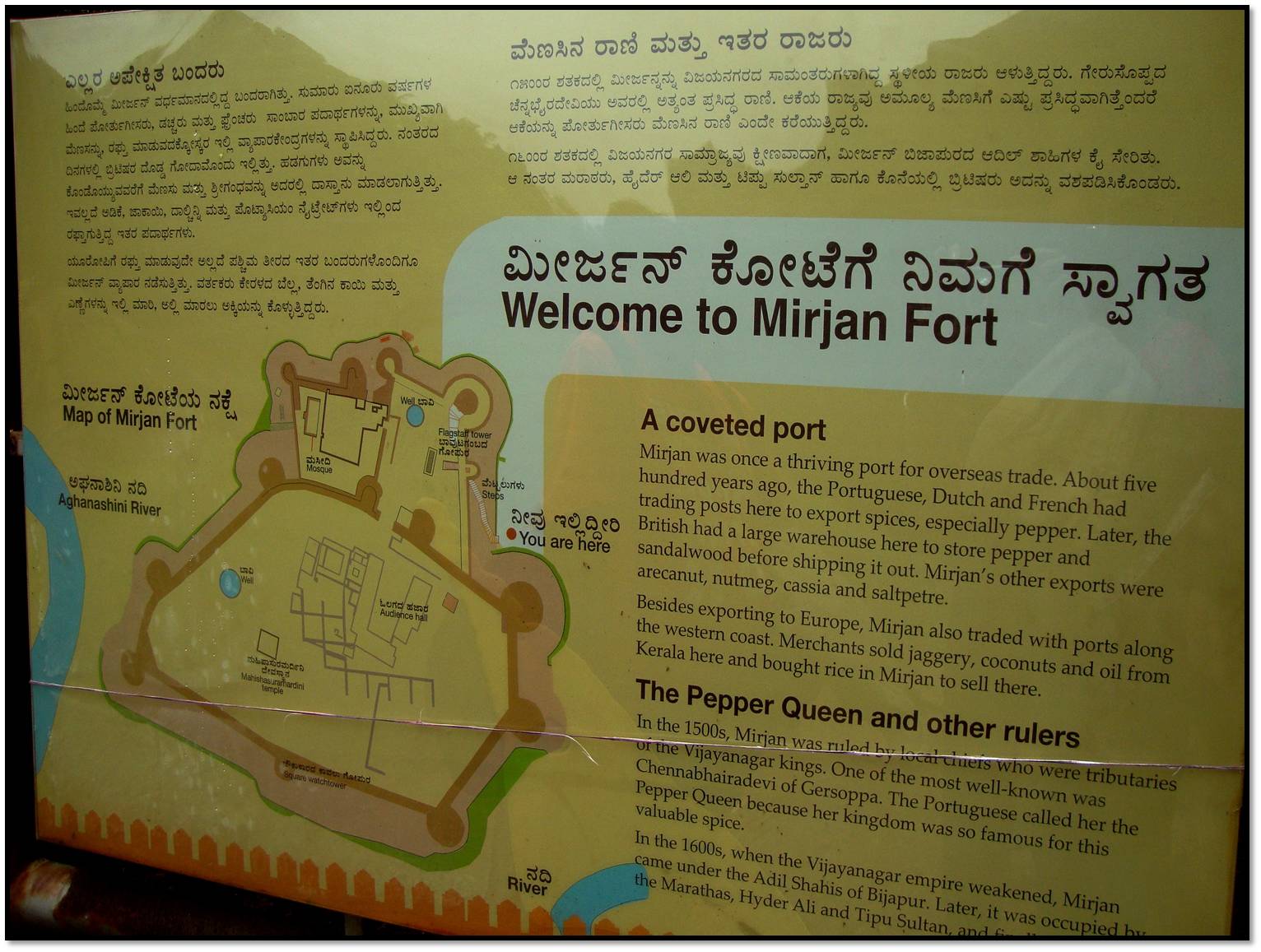 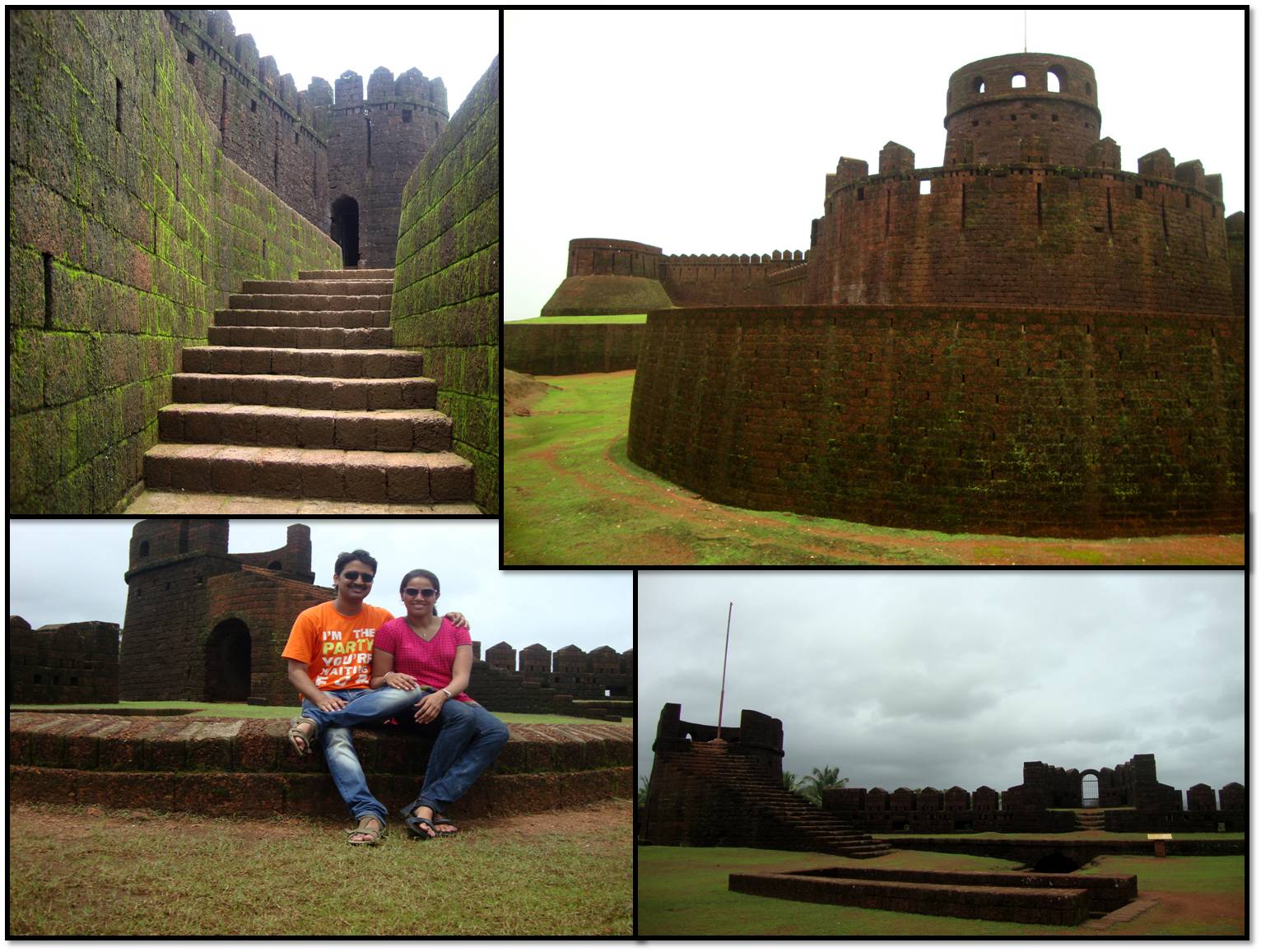 We spent about an hour in the fort,taking pictures & observing the complex. The weather was hot & humid even in the monsoons but within the fort,around the walls the temperature was soothing.

This fort, a site well maintained by the archaeological survey of India sadly hasn't been promoted as a tourist spot. I highly recommend you to visit this while in this part of the coast!

By around 3:00 PM we reached Gokarna & after delicious meal at the Pai Hotel, headed to the famous OM beach, which gets it's name from the om symbol shore it boasts of. But, to our surprise when we inquired in the hotel about the route to the hill top from where the om is visible, the answer we got was that the beach at Gokarna has shores which look like OM in multiple locations! Since we didn't have much time at our disposal, decided to explore those locations on our following visits & reached the OM beach.

By now, you might know that we do not like taking the tourist routes & thus went on a hike on the hill right up the canteen at OM beach. This hike was exactly what we expect out of a place as it was calm & stunningly peaceful. 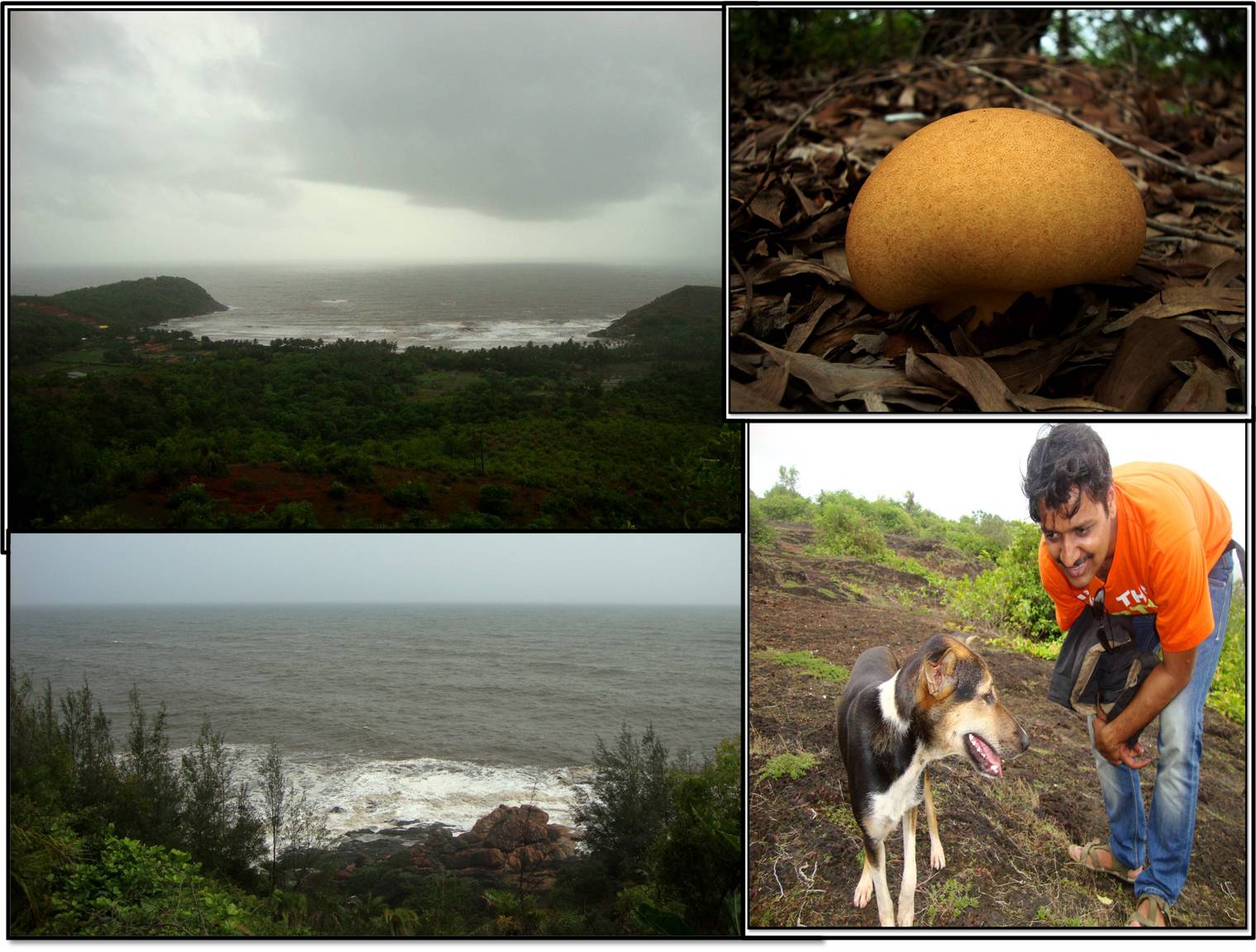 A cute doggie accompanied us all the way through the hike :) We also spotted some wild mushrooms on our way back & it was a great experience.

A relaxing 45 mins on the hill above OM beach & we traveled down to the tourist shore. A couple of snaps there for memory & we left the beach by around 5:30 PM.

Well, personally I didn't find anything fascinating about the OM beach probably because it was just the two of us & we didn't intend to get into the water. It looked like just another beach, with minimal facilities for the tourists. 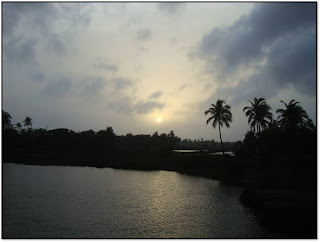 A picturesque sunset along the highway & a snack break was refreshing after a humid beach visit.

The return was my first experience of riding the bike after dark & I loved it. The highway roads were welcoming, although the lights from the incoming vehicles took some getting used to. However, being a stubborn girl I am, I did ride the complete 75 kms from Gokarna to Murudeshwara & in about 1.5 hours with a snacks break!

On reaching the GH, we decided to explore the food options in the city & after a short freshen up, came to the temple street. There are numerous shops on the main temple street offering products made of sea shells,bamboo & some tribal art.

Finally, a good looking & big Hotel Indraprastha was our dinner spot for the night & the food was better than we expected. After the dinner, we clicked a few pics of the shiva idol in low light & called it a night! The next day, Monday - 17th June 2013 was exclusively meant to head back to Bangalore as we had only taken a day off from work & due to the upcoming 3 week Ladakh trip, any more leaves would be problematic.

We got ready by 7 AM & after a bad b'fast experience at the GH, left Murudeshwara by 9 AM. The return route was quite straight forward & since it's a highway we did not expect much trouble, but nature had it's own plans :)

Much before we reached Bhatkal, which is about 14 kms from Murudeshwara - we witnessed the worst rains of our lives so far. The famous & beautiful Marvanthe beach was almost invisible in the pouring rains & we had to just get past the wonderful landscapes & had no chance of even pulling out the camera! The troublesome rain continued until we reached Surathkal & it suprisingly vanished as we headed closer to the Surathkal beach! The beach is just about 1.5 kms deviation from the highway & looking at the sky, we got a feeling that we were through the rains & could visit the beach as we were very close to it! 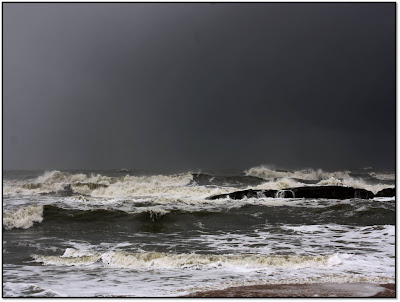 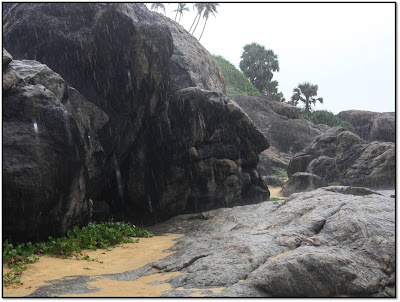 How dumb were we to get out of our rain gear & all set to take a few clicks! And there it came gushing on us.. Almost looked like the rain gods were laughing at our stupidity, in the coast during the monsoons & expecting it to stop raining :-D

We were almost stranded on the shore, without rain coats, with a savior umbrella & completely drenched clothes.

We could do nothing but laugh at ourselves for this act of idiocy & head out of Surathkal for giving us the most memorable rain experience in our life:) Rain just seemed to like us so much that it just did not take the word of leaving until we reached Sakleshpur.

We still had about 250 kms to reach Bangalore & it was raining intermittently throughout the way, which initially caused some trouble but we started enjoying the rains by the end of our journey. It's a spectacular experience to ride through the ghats in the rain & we had our share of bad roads too ;-) 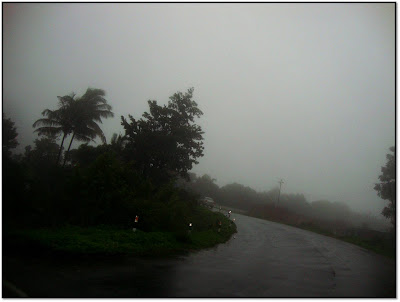 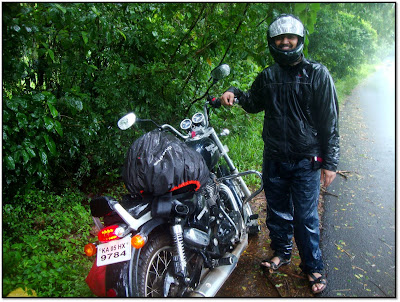 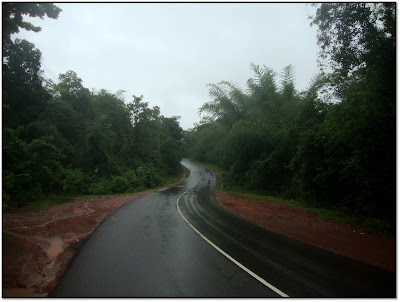 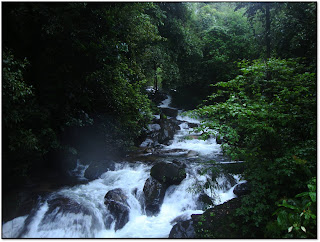 Waterfalls along the road were a treat to the eyes & made the journey easier as this was our longest bike trip so far & we had about 550 kms to cover to reach Bangalore!

The landscapes around was mesmerizing & even though it was getting late, we had to stop for a few pictures in the beautiful Sakleshpur. 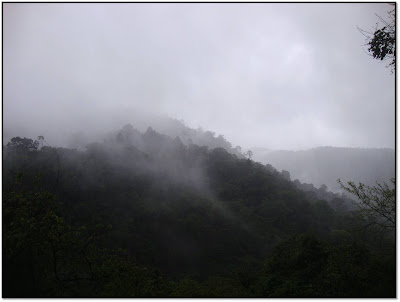 By now, we had ridden about 150 kms in the wet clothes & just couldn't manage to go any further without changing. So, after a few suspicious looks & questions from hoteliers managed to get a room, changed into fresh warm clothes & started out of Sakleshpur by 5 PM after a late lunch.

A 5.5 hours ride got us home & we couldn't wait to hit the bed! But the last 3 days would certainly remain in our memory for a long time to come! :-)

If you do get a chance to chase the monsoons across the coast of Karnataka - do it without hesitation. It's much more fun than you can imagine ;-)