As the title suggests - this post is all about our travel tale to the mighty Madhugiri fort, the only catch is - it was on our beast - Thunderbird 350! How did it go? read on..

A couple of bike trips of about 100kms under our belt & with our soul craving for more - My hubby & I chalked out a day trip plan as a prep for our upcoming Leh-Ladakh bike trip. Where should we go? Well, that usual comes from my Trip Wishlist. Might sound crazy, but yes I do maintain a note of the places which we would want to visit. This information is gathered on regular basis through multiple sources - Weekly Magazines, blogs from fellow travelers,  internet to name a few. Before I dive into the particulars of the trip - let me give a brief about my travel preferences. Being a travel freak, which surprisingly has come to light only recently , I love travelling to places which are not listed as the tourist locations in a region & prefer enjoying the place in leisure. I would rather go to a place which is not commercialized & hard to get to instead of visiting a place just to tick on my wishlist!

Now, getting back to the Madhugiri chapter - On May 1st 2013, Saturday we(always refers to my hubby & I, unless mentioned explicitly) :) started from our home in Girinagar,Bangalore by 5:10 AM and made our way towards Nelamangala. Although it was a mid summer month, by the time we reached Nelmangala- it was chilly & we were thankful that we got our gloves along! Stopped at Dabaspet by 6:20 AM, took a 5 mins break & started our journey again.


Madhugiri is a small town which boasts of a fort built on a monolith - second largest in Asia.

There are a couple of eateries - Hotel Kamat just before Dabaspet fly over & CCD just after Dabaspet, however since it was so early I had prepared hot poha in the morning for the two of us.

We decided to eat after reaching Madhugiri fort even though I was a little hungry by 6:30 ;-) At a steady pace we reached Madhugiri by 7:35 AM with a couple of stop-overs for photos.

After finishing a healthy b'fast, we started our trek by 8:00 AM.

Being a Wednesday, barring a few locals we hardly saw anyone during our ascent. I had done some research on the difficulty level of the trek & how much time it takes to complete it, but we had decided to do it at a leisure rate stopping wherever we felt like.

The fort consists of about 10 levels & when we started our journey didn't seem like much.The trek upto level 3 was nice & easy, with a lot of pit stops for photos.

A couple of wrong routes, some nice views & by 8:30 AM we reached Level 3.The biggest of all the levels in the trek, with a Kalyani,watch tower.

Once we got to level 5, we met a family - parents with their 2 children descending at around 8:45 AM! On conversing with them we found out that they started the trek by around 6:30 AM & also put a little fear in us saying the last 2 levels are really steep & they returned without getting to the top.

This did put some fear in us, but we wanted to see how far we could get.

The sight of the route to level 5 looked daunting in the heat, but we kept at it with the determination to get past it.

Each level in our kitty, felt like a great relief & the views were getting from OK to WOW.

Till now, no sight of anybody else on the trek made us feel like we owned the place :-)

By 9:15 AM we had reached level 7 & the goal seemed close! The sun was out by this time & we started feeling the heat, any amount of water/juice intake seemed to be getting drunk up by the harsh sun.

By 10:00 AM, we were sitting & relaxing at level 8 thinking just 2 more left, but when we saw how much more was yet to be conquered.


I did get the thought of stopping as the fort at level 9 as it was without any railings & steep.But, we were not ready to give up so easy when we were so close.Most important resort was resting whenever we felt tired & didn't want to go further.

After some rest, we managed to reach level 10 by 10:40 AM & were onto the ground for some rest.The breeze was soothing amidst the scorching sun & the view was breathtaking enough to make all the efforts spent worthy!

By 11:15 AM, after some photography we started to head down the hill & we met a lot of people starting their ascent. We did wonder, how tiring it would be for them as the mid day summer sun was out & it was not going to be easy.

To give you the stats - we had consumed about 4 liters of water and about a liter of juice/energy drinks since we started the trek & we were still feeling thirsty due to the heat.
Although we took about 4.5 hours to complete the trek, if done diligently strongly believe it can be achieved in 3.5 hrs :-)

Reached the bottom of the hill by 12:30 PM & were slightly upset as our bike tank was all scratched by monkeys! Leaving that behind we decided to roam around Madhugiri & check if we could find a good place to stop for lunch. Being a small town, we could hardly find any hotels & did not want to risk eating at someplace, thus decided to skip lunch & head to the blackbuck santuary at Maidanahalli.

It was around 1:15 when we started our journey towards the santuary & followed the boards which was the bad idea since the suggested route was about 12 kms extra & we had to ride through 3 kms of really bad road.

However, on reaching the santuary by 2:15 PM we were told that the black bucks only come out of their hiding during evening since it is summer. Hence, we decided to wait it out in one of the view huts. The apples & grapes we had packed served as lunch & we relaxed for a couple of mins before a few other groups turned up. However, none of them seemed to be there to see the black bucks & were making a lot of noise & in a picnic mood!

After waiting for about 1.5 hrs, the forest guards at the sanctuary asked us to visit the IB they were staying in. A blessing in disguise, a month old deer was jumping around! A few snaps with it & we planned to stay put until 4:30 PM and then head out of that place as the possibility of spotting black bucks were diminishing as the heat was still on. 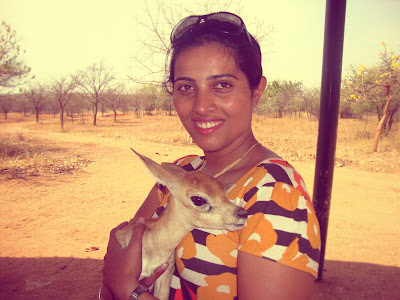 By then, the guards came along & suggested that we follow their bike. We didn't understand what they were getting at, and on questioning they came out with the fact that they will show us some black bucks.

We strongly believe in enjoying nature the way it is & are against any kind of roundabouts to see animals. Understanding that this was a trick to extract money we decided to say no to them & started from the sanctuary by 4:45 PM.

We took the route through - Girigondanahalli on our return, it is a fairly manageable road with tar in most of the places. Reached Kyatasandra & stopped at Hotel Pavitra for some lip smacking Tatte idly & Masala dosa. Headed out from here & reached home by 7:45 PM.

So, our take on Madhugiri - wonderful spot for a day trip. Might be enjoyable after monsoons rather than in summer :-) About Maidanahalli blackbuck Sanctuary, summer is not a good time to visit, specially during the day!

Happy travelling!!
Posted by Unknown at 23:56